Dragon’s are large, serpent-like creatures found around the 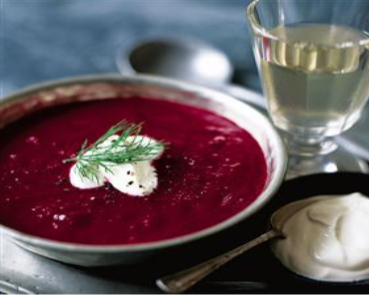 world, co-existing alongside and sometimes terrorising various communities. In the East, they are wingless and four-legged, but known for their intelligence. In the West, however, they are known for being winged and being able to breathe fire as well. From Asia to Scandinavia, these creatures are both respected and highly feared. However, some chosen warriors may choose to slay one such beast which is terrorising their community and use it to create a hearty dish.

Whilst we recommend using all parts of the dragon in a dish (The scales usually require roughly 48-72 hours of slow cooking to make palatable, so you may choose to use them in crafts instead), this soup makes particular use of the blood. Try and use fresh dragon’s blood in the soup: It gives a much better, spicier flavour.

(Okay, so this soup is actually Beetroot and Bramley Soup! It’s a hearty, earthy dish which is fantastic for those colder nights. Accompanied with sour cream and dill sprigs, it’s a wonderfully unique flavour that dwarfs more run-of-the-mill soups like cream of chicken and mushroom. No dragon’s were harmed in the making of this dish!)